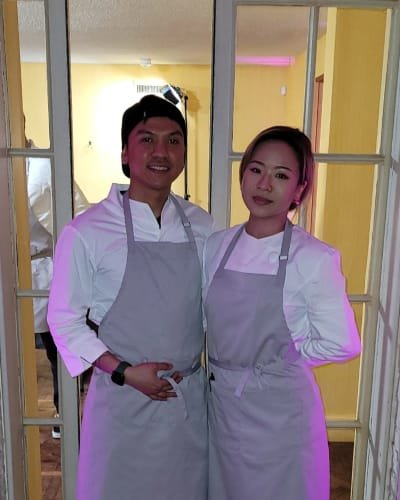 Zach is a pizza-obsessed chef, with nearly 15 years of experience in Japanese Cuisine and Hawaiian-Filipino comfort food. He was raised on Hawaii's fresh produce and rich culture, making it a natural rite of passage into his culinary career. He began his first job with washing rice for months, essentially prepping him to work at bigger and better places such as Roy's Ko Olina and Morimoto. Once the beaches and great weather ran its course, he took up an offer to work in DC to establish a Hawaiian food truck with a childhood friend. A million spam musubis and sweaty days later, he jumped right back onto the fine dining scene in hopes of practicing sushi again. Zach found the opportunity to study under celebrated chefs at SEI (Noriaki Yasutake) and Sushi Taro (Nobuhiro Yamazaki), where he worked diligently for 5 years. To top off his workaholic endeavors, he simultaneously co-launched a food and entertainment business, AlohaCr3w Catering, a side hustle that offered Luaus at any given season. Zach's end goal is to own a small hole-in-the-wall that will offer a café in the morning and an omakase in the evening.

Amy is a Vietnamese-American chef from Virginia who has a shameless love for custards and whipped cream; later supporting her 13 years of Choux à la Crème experience- all self-taught. She secretly dropped out of nursing school and applied for her first job at a Korean-owned dessert shop to gain experience before jumping head first into an actual restaurant. Her schedule quickly turned into double shifts, making gelato crepes in the morning and being a sushi apprentice in the evening at Kona Grill. Once she grew tired of the sauced-up rolls, the search for traditional practice became urgent. With guidance from her friends, Amy swiftly moved into DC to work at Donburi, O-Ku, Aloha Cr3w Catering, and Sushi Taro (where she captured Zach!). Besides handling all social media platforms and customer service, her current position is pastry chef and Zach's sous.